Paris Saint-Germain forward, Neymar, has slammed the referee after he was booked for a goal celebration during his team’s 3-1 UEFA Champions League win over Maccabi Haifa on Wednesday.

PSG came from a goal down to beat Maccabi Haifa, thanks to three goals from Neymar, Kylian Mbappe, and Lionel Messi.

However, during the contest, Neymar was booked by the referee after he brought out his trademark celebration after scoring his team’s third goal of the night.

The Brazilian, who believes the referee lacked respect for giving him a yellow card, was naturally unhappy with the booking and took to his Twitter handle after the game to register his protest.

Neymar tweeted: “Total lack of respect for the athlete. This kind of thing can’t happen.

“I take the yellow for simply not having done anything and I continue to be harmed. And the judge? Not even to say he was wrong, he will! A lot of lack of respect.” 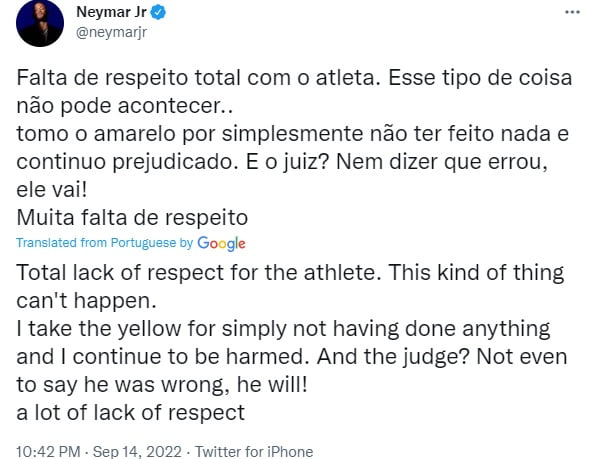