Bonucci drank the Euro 2020 sponsored beverages in the media room during his post-match press conference following Italy’s win against England.

Earlier in the Euro 2020, Ronaldo made global headlines after moving the Coca-Cola bottles positioned in front of the players speaking to the media due to his preference for the healthier option of water.

Similarly, Pogba, days later, moved Heineken bottles out of the picture due to alcohol being against his Islamic faith. 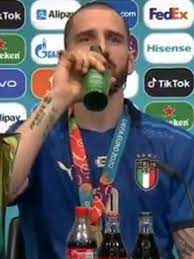 However, Bonucci instead opened a bottle of each of the aforementioned drinks in the post-match celebrations.

After swigging a Heineken at the presser, Bonucci said: “I deserved this one, didn’t I?”

The centre-back then picked up a Coke bottle and drank from it before stating: “I will drink everything tonight.”

How to Take Action Every Day: 5 Powerful Habits

Just Viral Media - July 21, 2021
0
“It had long since come to my attention that people of accomplishment rarely sat back and let things happen to them. They went...

Just Viral Media - July 19, 2021
0
Depression is a mental disorder that affects people of all ages. More than 264 million worldwide are suffering from depression. Although this is...

How to Overcome Perfectionism: 6 Powerful Habits

15 Simple Ways to Spread Happiness and Kindness Around You

Just Viral Media - July 1, 2021
0
“When you are content to be simply yourself and don’t compare or compete, everybody will respect you.”Lao Tzu Today I’d like to focus on a...