Gboyega Akosile, the Chief Press Secretary to the Governor of Lagos State, on Wednesday, described as false a video claiming to show people booing the convoy of his principal, Governor Babajide Sanwo-Olu, on Tuesday evening at the Teslim Balogun Stadium, Surulere.

The 23 seconds video, which a Twitter user, @absuxxess, shared, showed some cars leaving the premises of the Teslim Balogun Stadium after the Super Eagles of Nigeria defeated Lesotho 3-0 in an African Cup of Nations, AFCON, qualifier tie on Tuesday evening.

Some youths at the Stadium gate booed the occupants of the cars with a chant of ‘Ole,’ which means ‘thief’ in the Yoruba language.

However, reacting to the video, Akosile, in a tweet, insisted that it was not Sanwo-Olu’s convoy.

Akosile wrote, “This is wrong, totally false. This is not Governor @jidesanwoolu’s convoy. Let’s stay away from spreading falsehoods. I’d implore you to correct your wrongful publication.” 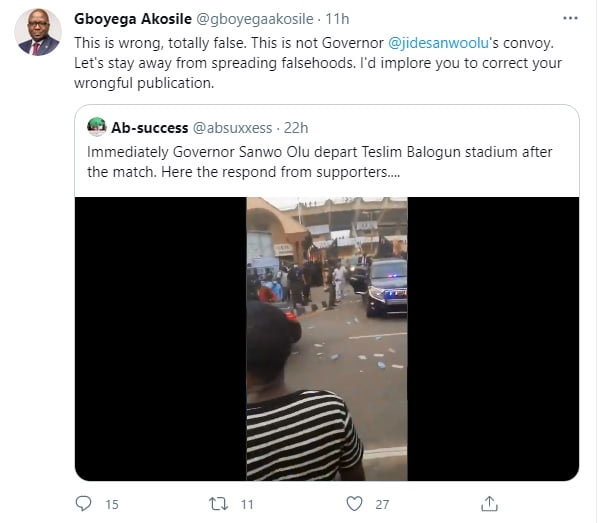 Cheating Is Not Enough Reason To Leave A Relationship – Uti Nwachukwu

JournalTV - April 14, 2021
0
Popular media personality and actor, Uti Nwachukwu has said that cheating is not enough reason for a person to call it quits in...

JournalTV - April 14, 2021
0
Liverpool boss, Jurgen Klopp has revealed that his side has made ‘special plans’ for dealing with Real Madrid’s Vinicius Jr. when both sides...

JournalTV - April 14, 2021
0
Manchester United manager, Ole Gunnar Solskjaer, has recalled when Sir Alex Ferguson, “absolutely lambasted,” him, after he got sent off during a game...

Champions League: Salah worried Liverpool will sell him this summer

JournalTV - April 14, 2021
0
Arsenal is unlikely to renew David Luiz’s contract this summer, according to Football London. Luiz has made 16 starts this season for the Gunners,...

“I Didn’t Win Award Because I Don’t Belong To A Clique” – Ruth Kadiri...

JournalTV - April 14, 2021
0
Nollywood actress, Ruth Kadiri has expressed her disappointment with the fact that she was not recognized at the just-concluded Eko Star Film and...

JournalTV - April 14, 2021
0
Manchester United manager, Ole Gunnar Solskjaer, has recalled when Sir Alex Ferguson, “absolutely lambasted,” him, after he got sent off during a game...

Fela Did Not Like People Remixing His Songs – Femi Anikulapo-Kuti

JournalTV - April 14, 2021
0
Mercy Eke, a former BBNaija winner has said she’s no longer in a relationship with ex-lover, Ike Onyema. She...