The COVID-19 test result that prevented Everton midfielder, Alex Iwobi from participating in the African Cup of Nations qualifying game against Benin Republic on Saturday is fake, according to Super Eagles coach Gernot Rohr.

Rohr said that the midfielder will be fielded against Lesotho on Tuesday in the last match of the AFCON qualifiers.

Recall that Nigeria booked their place in Cameroon even before the kick off of the match against Benin Republic on Saturday following the goalless draw in an earlier game between Lesotho and Sierra Leone.

Iwobi, who was listed in Rohr’s XI for the game against Squirrels was withdrawn before filing out after he was said to have tested positive for COVID-19.

And on Monday, Colin Udoh, ESPN journalist, tweeted that, “Gernot Rohr has told me that although Everton’s Alex Iwobi tested positive for COVID-19 on arrival in Benin, he believes the result is “fake”.

“A second test has been taken and result due soon. Rohr tells me he’s confident Iwobi will play on Tuesday”. 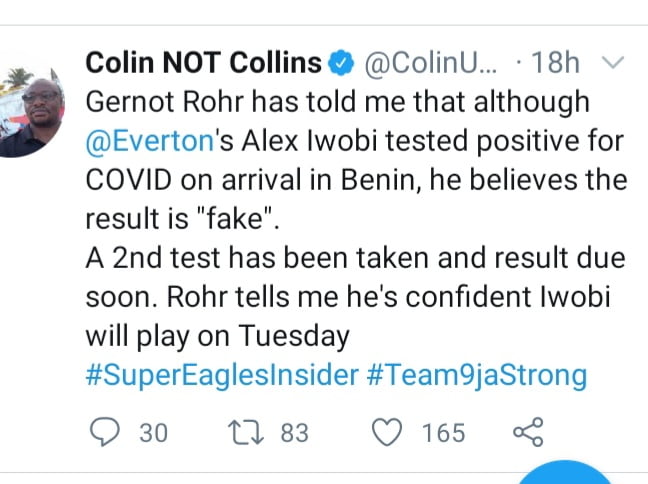